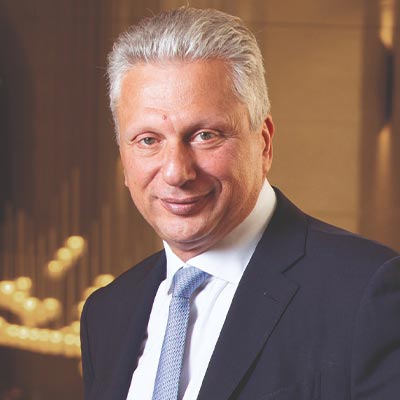 Aiman Ezzat was appointed Chief Executive Officer of the Capgemini Group on 20 May 2020, at the close of the Annual General Meeting of Shareholders.

During his tenure as Chief Operating Officer (from January 1, 2018 to May 2020) and prior to this as Chief Financial Officer, from December 2012 to 2018, Aiman reinforced both the Group’s position as a global leader as well as its financial resilience. He also played an instrumental role in the implementation of the Group’s new operating model.

With more than 20 years’ experience at Capgemini, he has developed a deep knowledge of the Group’s main businesses and has worked in many countries, notably the UK and the US, where he lived for more than 15 years.

In November 2007, Aiman was appointed COO of the Financial Services Global Business Unit (GBU) and became its Global Head in December 2008 which he held up until 2012. This sector has become the Group’s largest worldwide.

From 2005 to 2007, Aiman was Capgemini’s Deputy Director of Strategy, during which time he participated in several transformation projects including the turnaround of the activity in the United States and the development of offshore capabilities in India. He played a very active role in the acquisition and integration of Kanbay, a global IT services firm focused on the financial services industry, which marked the acceleration of establishing Capgemini’s presence in India.

Before joining Capgemini in 2000, Aiman served as Managing Director of International Operations at a global business and technology company, with responsibility for Asia and Europe.

This came after nine years at Gemini Consulting, the former brand of the strategic and transformation consulting arm of the Capgemini Group, now Capgemini Invent, where he held a number of roles including Global Head of the Oil and Chemicals practice.