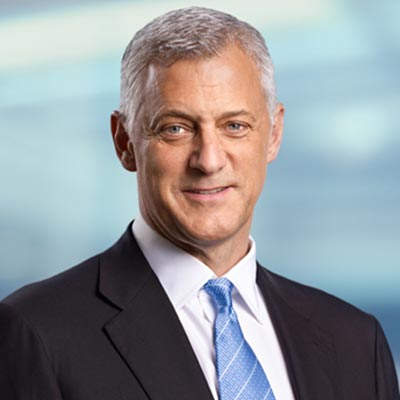 Bill Winters is the Group Chief Executive of Standard Chartered PLC (since Jun ‘15). Standard Chartered is a UK headquartered, emerging markets focussed bank, employing more than 85,000 people, with a presence in 59 markets across Asia, Africa and the Middle East.

Prior to joining Standard Chartered, Bill spent 26 years with JP Morgan and was Co-CEO of the Investment Bank (2004-2009). He has served as a committee member of the Independent Commission on Banking, established by the UK Govt (2010) and as an advisor to the Parliamentary Commission on Banking Standards. Bill also founded Renshaw Bay, a hedge fund which he ran from 2011-2015.

Bill is a leading voice on sustainability. In 2020-21, he chaired the Taskforce for Scaling Voluntary Carbon Markets – a private sector initiative bringing together 250+ global organisations across the carbon value chain to unlock the potential of voluntary carbon credits in climate change mitigation. Bill also co-chaired the B20 Action Council on Sustainability & Global Emergencies in 2021. Under Bill’s leadership, Standard Chartered is chairing the Net Zero Banking Alliance and has committed to achieving Net Zero emissions by 2050.

Bill is a Non-Executive Director of Novartis International AG and is a Director of Climate Impact X, an exchange and marketplace for high quality carbon credits.

Bill was awarded a CBE in 2013 and holds a BA in International Relations from Colgate University and an MBA from Wharton.