Minister of State for External Affairs & Culture of India, Government of India 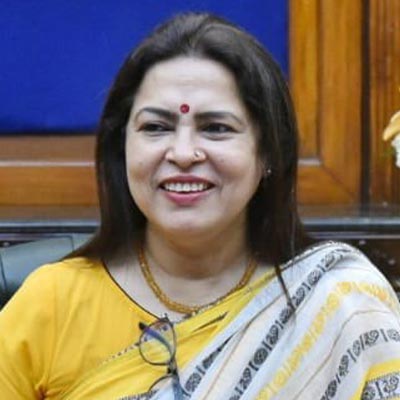 Meenakashi Lekhi is a Member of Parliament from the New Delhi Parliamentary constituency. She enrolled with the Bar Council of Delhi in 1990, and started practicing at the Supreme Court of India, Delhi High Court, other courts, tribunals and forums in Delhi and other parts of the country. She has argued a wide variety of matters, such as bails, revisions, trials, appeals, criminal writs, murder references, Prevention of Corruption Act/Official Secrets Act/Customs Act/FERA prosecutions, Domestic Violence and Family Law dispute. Lekhi has been part of the Drafting Committees for bills like “Women Reservation Bill” and “Problem of Sexual Harassment at Workplace”. She has been in National Commission for Women (NCW)’s special committee, Chairperson of Special Task Force on Women Empowerment, Vice Chairperson of JPM, Blind School, New Delhi & Jt. Secretary Blind Relief Association. EDUCATION HINDU COLLEGE, NEW DELHI – B.SC. (HONS) [1984 – 1987] Campus law centre 1, Delhi university – ll.b. [1987 – 1990] COMMUNICATION Meenakashi Lekhi is a National Spokesperson of the Bhartiya Janta Party (BJP). She has been successfully articulating, advocating and campaigning BJP’s policies, programs and campaigns. She participates in various television shows on matters on National and International Importance. She was also National Vice President, BJP Mahila Morcha (2010). OTHER ACHIEVEMENTS Meenakashi Lekhi represented media in the court to get the ban on media coverage of case proceedings in the Nirbhaya rape case revoked. She was successful in the effort. Meenakashi Lekhi played an active role in the drafting of the Criminal Law(Amendment) Bill, 2013, which provided for amending the existing laws related to sexual violence. She took up the case of permanent commissioning of women officers in the Indian Armed Forces. Meenakashi Lekhi was the lawyer for the victim in the Shanti Mukund Hospital rape case.