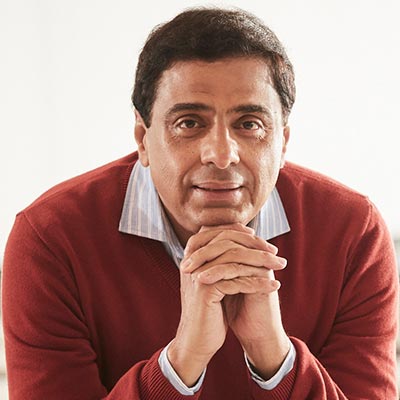 Ronnie’s first foray was Cable TV in India and for the first two years of that journey he found no takers and only advise was to treat it as a failed start up and move on, but with him staying at it he was credited with having pioneered Cable TV for all of India.

Entrepreneurship is about finding and seizing opportunities and moving on from failures and Ronnie saw an opportunity in toothbrush manufacturing and after many setbacks went on to build one of the largest toothbrush operations in India, at a time where there was no eco-system for PE Funding or bank debt to start ups. The other opportunity was TV Home Shopping but it was well before its time and was a big failure, but not enough for him to question if he should stick it out as an entrepreneur.

Ronnie went on to build a media and entertainment company – UTV, where post many pivots and four almost near bankruptcies and 15 years of focussed work with strong co-founders and a large team, it scaled to a size spanning all aspects of Content and Platform and then he divested UTV to The Walt Disney Co in 2012.

Perception in most cases is larger than reality and so in spite of so many failures, Newsweek termed him the Jack Warner of India, Esquire rated him one of the 75 most influential people of the 21st century and Fortune as Asia’s 25 most powerful.

Having lived it and seen the misconception that it’s all about quick success and that failure is to frown on – he has authored 2 books : ‘Dream With Your Eyes Open’ as his commitment to champion entrepreneurship and evangelize failure, and ‘Skill It, Kill It’ which aims to pull back the curtain on the professional world to give you an insider’s view of the ‘invisible’ skills sought and rewarded by global businesses, top recruiters and leading CEOs.

Ronnie got the term “cat with nine lives” attached to him by colleagues and peers for the number of times he had failed, but reflecting on his setbacks and counting on his main virtue that success can never be timed and staying the course is the only option, Ronnie in his second innings decided to deepen his commitment to making India a better place through a focus on two of the largest sunrise sectors – Online Education & the not-for-profit rural / social space. He is Co-Founder & Chairman of upGrad which zeros in on the massive Online Education market and the fact that Learning for every working professional is now a lifelong commitment. He, along with his wife Zarina, are the Co-Founders of The Swades Foundation, which is committed to empower one million lives in rural India every 5-7 years through a 360 degree model spanning Water, Sanitation, Health, Education and Livelihood to lift them out of poverty permanently.

As a hobby and passion Ronnie loves to tell stories that must to told via movies with his new brand RSVP and he owns 3 sports teams under the brand U Mumba in Kabaddi, Volleyball and Football even though he has never played any of the sports himself.