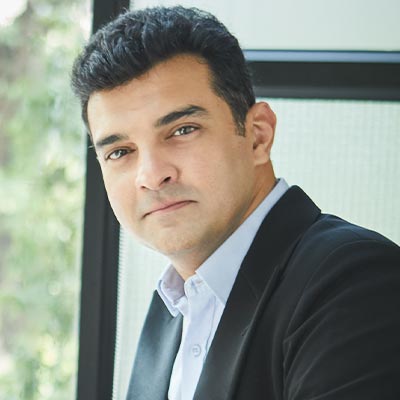 After a B.Com from Sydenham College and a Masters in Management Studies from the Jamnalal Bajaj Institute, Siddharth began his career with the Procter & Gamble Company in Mumbai in brand management.

From P&G, Siddharth moved to STAR TV in the strategic planning division. After a brief stint in Hong Kong as part of the Newscorp Executive Development Program, he moved back to Mumbai to work on the launch marketing of the first season of ‘Kaun Banega Crorepati’ on Star Plus. In recognition for the ground-breaking marketing efforts behind the success of the show, he was nominated for the Team Newscorp Global Excellence Awards. Siddharth then moved to the STAR TV Middle East operations, based in Dubai, where he was Regional Marketing Manager for the network, responsible for Ad Sales, Marketing, PR and Corporate Communications for the region. In 2002, Siddharth moved back to the STAR headquarters in Hong Kong, as Director (Marketing) and was promoted to Vice President in 2003. At STAR headquarters in Hong Kong, he led the Central Marketing & Creative Services team, which developed marketing campaigns for STAR channels across India, China, Taiwan, Southeast Asia, the U.K. and the U.S.

Siddharth joined UTV in Mumbai in 2005, as Senior Vice President, Marketing & Communications for the Group, across Motion Pictures, Broadcasting, TV Production, Animation and Corporate. He led the marketing efforts responsible for taking Hungama TV to a leadership position in the competitive kids broadcasting space. He also led the marketing efforts behind multiple path-breaking films, including the cult BAFTA-nominated blockbuster Rang De Basanti and the sleeper hit Khosla Ka Ghosla, both of which were released in 2006 and started a new trend in the way movies were marketed in India. In his next role, he took over the Revenue function at UTV Motion Pictures and was responsible for Distribution & Syndication worldwide, in addition to his Marketing responsibilities.

In January 2008, Siddharth took over as CEO of UTV Motion Pictures and after the integration of UTV with The Walt Disney Company (India) in 2012, he held the role of Managing Director, Studios. Responsible for all aspects of Development, Production, Marketing, Distribution and Syndication, he led the studio to incredible commercial success and critical acclaim across a six-year period, producing and releasing some of the most important and successful films of the decade, such as Taare Zameen Par, Jaane Tu Ya Jaane Na, Jodhaa Akbar, Fashion, Aamir, A Wednesday!, Dev D, Oye Lucky! Lucky Oye!, Kaminey, Wake up Sid, Raajneeti, Udaan, Peepli [Live], Welcome to Sajjanpur, No One Killed Jessica, Delhi Belly, Paan Singh Tomar, Shahid, Rowdy Rathore, Barfi!, ABCD, Kai Po Che, Yeh Jawaani Hai Deewani, The Lunchbox and Chennai Express. The films produced by UTV under Siddharth’s leadership won numerous awards, including the prestigious National Awards, Filmfare Awards and many others, establishing UTV Motion Pictures as one of India’s most admired and successful studios. 5 of the movies that were selected to represent India at the Academy Awards during this period were either produced or released by UTV.

In January 2014, Siddharth was promoted to Managing Director of Disney India, with the responsibility for driving the strategy and growth for The Walt Disney Company is one of its most important growth markets in the world. Disney India’s business under Siddharth’s leadership spanned across broadcasting, movies, consumer products, digital experiences and live entertainment, represented through multiple brands namely Disney, UTV, Marvel, Lucasfilm, Pixar, ABC, bindass, Indiagames and Hungama TV. Under Siddharth’s leadership over three years from Jan 2014 till Dec 2016, Disney emerged as one of India’s leading media and entertainment companies. It produced and released India’s highest and then second highest-grossing movies of all time (Dangal in 2016 and PK in 2014) as well as India’s then highest-grossing Hollywood movie of all time (The Jungle Book in 2016), as well as a host of other successful movies like Kick, 2 States, ABCD 2, Haider, Heropanti, Highway, Khoobsurat and Filmistaan. Siddharth also pioneered a new format of entertainment in the country, producing the first-ever Broadway-scale theatrical show to be mounted in India with a completely local cast and crew, Disney’s Beauty and The Beast, which opened to huge commercial and critical success in Mumbai and Delhi in 2015.

In 2017, Siddharth moved on from Disney to set up his own production house, Roy Kapur Films (RKF), which produces content across all platforms, formats and genres. Roy Kapur Films’ first production The Sky is Pink, starring Priyanka Chopra Jonas and Farhan Akhtar, was the only Asian film selected for a Gala Premiere at the Toronto International Film Festival (TIFF) in 2019. In February 2020 RKF’s Yeh Ballet, a Netflix Original, released to great acclaim from audiences and critics alike. RKF’s first series, the crime thriller Aranyak starring Raveena Tandon, streamed in December 2021 and broke into the Global Top 10 non-English Series on Netflix in the very first week of its launch. Celebrating the work of Homi Bhabha and Vikram Sarabhai, its historical drama series Rocket Boys streamed on Sony Liv and it went down in history as India’s first series based on scientists. Upcoming projects from Roy Kapur Films include the war drama Pippa directed by Raja Menon starring Ishaan Khatter, the comedy-drama Woh Ladki Hai Kahaan? starring Taapsee Pannu and Pratik Gandhi, the comedy-drama GOBAR!, the Season 2 of Rocket Boys, Season 2 of Aranyak, a biopic on the Matka King and an official series adaptation of William Dalrymple’s 2019 bestseller The Anarchy: The Relentless Rise of the East India Company, amongst numerous other feature films and series in various stages of active development.

Siddharth is President of the Producers Guild of India, Managing Trustee of the Mumbai Academy of Moving Images (MAMI) and Co-Chairman of the CII Media & Entertainment Committee. He has featured on Variety’s annual list of the Top 500 Most Influential People in Global Entertainment for 5 consecutive years (2017-21) and has been part of The Economic Times Top 40 Indian Business Leaders Under 40 and The Hollywood Reporter Next Generation Asia Inaugural Class of Young Leaders, amongst numerous other awards for his leadership and achievements.