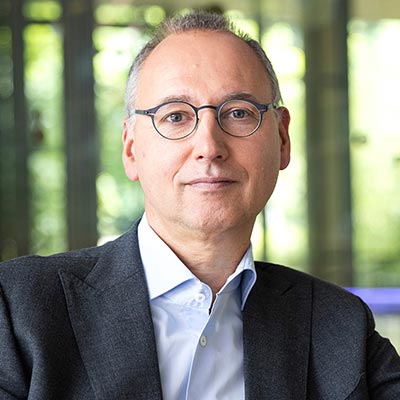 Werner Baumann became Chairman of the Board of Management (CEO) of Bayer AG on May 1, 2016. Since January 1, 2020, he is also the company’s Chief Sustainability Officer.

Werner Baumann was born in Krefeld, Germany, on October 6, 1962. After studying economics at RWTH Aachen University and the University of Cologne, he joined Bayer in 1988. His first duties were in the Corporate Finance Department in Leverkusen. In 1991 he transferred to Bayer Hispania Comercial in Barcelona, Spain, to take up a position as controller, becoming assistant to the managing director in 1995. One year later, he moved to Bayer Corporation in Tarrytown, New York, latterly heading up the global Business Planning & Administration organization of the Diagnostics Business Group. In July 2002, Baumann returned to Germany to become a member of the Executive Committee and Head of Central Administration & Organization at Bayer HealthCare. In October 2003, he was appointed a member of the Board of Management of the newly formed subgroup Bayer HealthCare AG, also serving as that company’s Labor Director. As a member of the Board of Management and Labor Director of Bayer Schering Pharma AG, Berlin, Germany, from 2006 through September 2009, he actively participated in this company’s integration into the former HealthCare subgroup.

Effective January 1, 2010, Baumann was Chief Financial Officer of Bayer AG. From October 1, 2014, until his appointment as Chairman of the Board of Management, he was Chief Strategy and Portfolio Officer. Between April and the end of December 2015, Baumann was additionally Chairman of the Board of Management of Bayer HealthCare AG. From January 1, 2020, to January 31, 2021, in addition to his role as CEO, he was also Labor Director of Bayer AG.